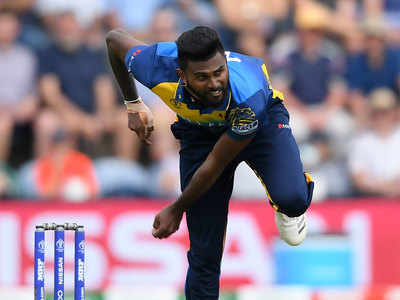 The 33-year old left arm seamer and all-rounder believes that now the time is right for him to step aside and make room for the next generation of Sri Lankan cricketers.

He will though continue to play domestic cricket.

Udana made his international debut in a T20 I against Australia in June 2009, and played his first one day international for his country three years later.

He was part of the side that featured in the recent limited overs series against India, and that, int eh end, proved to be his international swansong. Never a regular during that era, he eventually played in 21 ODIs and 34 T20Is for Sri Lanka, taking 45 international wickets, with his best being a spell of 3/11 in a T20I.

A right-handed bat, he made nearly 500 runs in international cricket, with a top score of 84 not out against South Africa in March 2019. That broke the world record for the highest individual score made by a player batting at number eight in a T20 match.

Arguably his finest performance with the bat came two years ago in an ODI against South Africa where he shared a stand of 58 runs with Kasun Rajitha. That was the highest 10th wicket partnership for Sri Lanka in ODI cricket.

Despite his exploits in one day cricket, however, Usura was never in contention for a place in the Sri Lankan test side.

In the 2020 IPL auction he was bought by the Royal Challengers Bangalore for US $70,000 but his contract was not renewed this year. However, he was drafted by the Colombo Kings for the inaugural edition of the Lanka Premier League, and has played for the Rajshahi Kings in the Pakistan equivalent.

Udana says that he tried to serve is country with the utmost dedication and commitment and, that, through cricket, he has made friendships that will last a lifetime.

The Sri Lankan Cricket Board have thanked Udana for his serve, and have wished him luck in all his future endeavours.